People awards:You can send in votes for up to 3 players in each category. Votes for yourself will not be counted.

Alternative Awards TBA: You are invited to suggest some alternative award categories below...

Map Awards (view all the 2011 maps):View all the Maps submitted in 2011 in their categories for review. You can send in a vote for 1 map in each category, or just your 5 favorite maps overall.

All Luxers are asked to submit their votes during October via <a href="mailto:lux@sillysoft.net?subject=Luxtoberfest8-votes">email</a> or forum PM.

This is a secret ballot, please don't post your votes here. Questions? 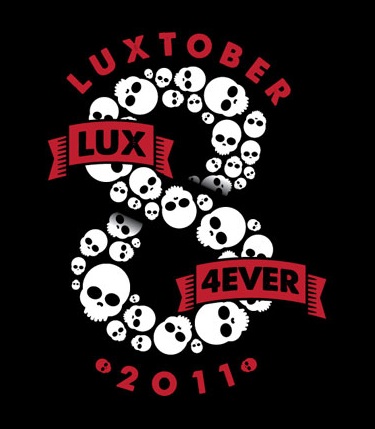 I cant beleive that nobody posted here since the Luxtoberfest have begun.....Is it just me or this year Luxtoberfest is kinda strange??? For sure theres not much players playing this year and it seems that not much people post in the forums of Luxtoberfest either....For sure I think para is doing a good job ,but I think he should have had more helps from the other mods or dustin to host some tournments.......
Top

Well, snype's been having problems... And the only weird thing is how... crowded these weeks are becoming. We have as many as four events on the weekdays alone.
Top

About my near-complete absence from the game (not the forums) during luxtober..... the focus on bio disgusts me, that's all. Of course, we have to play what the people want to play (as unfortunate as that is) so I joined in, played a few games of bio. It was enough to make me retire for the month.

I thought the mods and admins did a good job. In retrospect, it seemed like an average month with zombie avatars.... but that's just me.

The forums, however, I feel are doing well, I wouldn't say that the Luxtoberfest thread is suffering. Family Feud was entertaining to say the least

Indeed, now would be a great time to send in your votes!
Top

Whirly has my vote there.

Oh, but please do vote Engie for Rookie of the Year. I'm trying to repeat.
Top

Will luxtober be Vox inclusive this year? There was a Vox tournament last year from memory. Be worth considering a Vox map award as well. Mb has been prolific with his Vox cartography and made some of his best maps ever for that game IMO. Napoleonic Wars comes to mind especially.
Top

That's a good idea Behemoth, although it may be a little late to include it now. Send in your best Vox map votes anyone that wants to.

It's getting close now, so everyone cast your votes!
Top

ah votes... done em... I do say though... I hate that I missed the lux bowl(both bowling and football). Those were my two favorites. Maybe next year, things won't be as... crushed together.
Top

Today is the last day to cast your votes! Don't delay, vote right now if you haven't yet!
Top

And many thanks to everyone who has already voted! Remember, you can also suggest alternative award categories and their winners. No promises they will happen, but I'll consider all ideas sent my way.